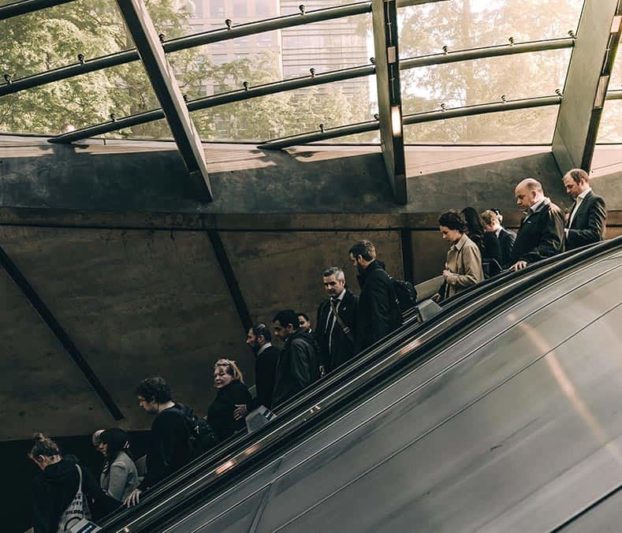 The global economic recovery continued in July, with the vaccine rollout making steady progress and restrictions on activity being eased further in several developed nations. Sentiment was, however, dented by the resurgence of COVID-19 cases in various countries, as the more contagious Delta variant is emerging as the dominant strain. Despite this resurgence, global equities as measured by the MSCI World Index rose +1.8% for the month. Developed market equities gained in July, reaffirming the general market view that new lockdown measures are not expected to be implemented in the US and that the resurgence of the virus does not pose a significant threat to the broader economy.

Although markets continued to focus primarily on COVID-19, inflation data and corporate earnings, the potential impact of foreign disruption became increasingly apparent. Emerging markets dropped sharply following the announcement by Chinese authorities of new anti-profit regulations for the online education sector, as well as potential further regulatory restrictions pertaining to raising of foreign capital. US 10-year Treasury yields continued their recent decline, dipping below 1.2% during the month. Growth stocks benefited from the decline in yields and returned +2.9%, while value stocks returned +0.7%. US stocks were amongst the best performers, with the S&P 500 Index gaining +2.4%, as 60% of constituent companies reported earnings during the month, with a record 88% beating earnings expectations.

On the commodity front, iron ore prices dropped by 10% in the face of a pledge by Chinese authorities to clamp down on steel production. During the month the price of Brent crude oil briefly fell below US$70 per barrel as oil-producing nations agreed to increase output. After declining -7.2% in June, gold added +2.5% in July, on renewed signs that the US Federal Reserve may not hike rates and start reducing economic support in the near term.

In addition to the sustainability of economic momentum being called into question, US markets contended with the intensified regulatory focus of the Chinese government. However, both factors were ultimately overshadowed by the strong earnings season and equities rose, with the S&P 500 hitting all-time highs. The S&P 500 gained +2.4%, while the Nasdaq added +1.2% and the Dow Jones advanced by +1.3%. In contrast, US Treasury yields slumped to February levels, which would generally be associated with a slowdown in economic activity. We do not believe that the bond market is reflecting a deterioration in the health of the economy, but was rather driven by unusually strong demand caused Federal Reserve purchases, institutional investors rebalancing after a period of strong equity market gains and elevated cash balances across the private sector. Yields should move higher as these factors start to fade over the remainder of the year.

Data continues to paint a healthy economic picture. Consumer confidence as measured by the Conference Board stayed at elevated levels in July, unchanged from previous months. US inflation surprised to the upside for the fourth consecutive month, with the increase in the headline consumer price index (CPI) reaching 5.4% year-on-year in June. The recovery in the labour market picked up pace with 850,000 jobs added in June – the largest monthly gain since last August. Federal Reserve Chair Jerome Powell described the job market as still having “some ground to cover” before it would be appropriate to withdraw some economic support, which has been in place since the beginning of the pandemic.

Another potential catalyst for higher bond yields is president Biden’s infrastructure spending ambitions, although progress remained elusive over the course of the month with details of the deal being tough to pin down. The normalisation of monetary policy will be another key factor influencing bond yields going forward. At the July meeting, the Federal Reserve stated that although the economy made progress toward its goals, it was not yet viewed as “substantial” and that a tapering of asset purchases is only expected late this year or early next year.

In July, the UK lifted most remaining restrictions related to COVID-19, although there was an increase in infection rates prior to the announcement. Subsequently, however, daily infection rates unexpectedly decreased despite heightened levels of social interaction. In this regard, the UK will be monitored closely by other countries with comparable vaccination levels to determine the suitability of adopting a similar approach to relaxing confinement measures. Should UK hospital admissions remain subdued, global market sentiment is expected to improve significantly.

The UK economy grew by +0.8% in the month of May, well below consensus expectations of +1.5% as supply bottlenecks are putting pressure on activity levels. The FTSE 100 Index ended July flat, although sterling strength against other major hard currencies caused many defensive multinational companies to fare poorly. Markets initially sold off in the first part of the month due to ongoing fears surrounding the global growth outlook and spread of the pandemic. Risk appetite returned, however, and markets gained ground during the second half of the month, with economically sensitive sectors performing well.

In the Eurozone, business activity grew at its fastest rate in 21 years, with a robust improvement in service sector activity. Over 60% of the population in the four largest countries have received at least one vaccination dose. Eurozone equities notched up gains in July. Top performing sectors included information technology, real estate and materials. The energy sector was the main laggard.

The primary Eurozone development during July was the tweaking of its inflation target to 2% from a “below, but close to 2%” goal, although the tools to achieve the target remain the same. If the Eurozone is to break out of the low-growth, low-inflation environment it has become synonymous with, fiscal policy rather than monetary policy will have to be relied on as there is limited scope to shift interest rates further into negative territory and quantitative easing programmes are already in place.

The launch of the European Union’s “Fit for 55” package of proposals also attracted attention in July. The name refers to the EU’s 55% emission reduction target that has been set for 2030, and the proposals include a large number of initiatives designed to set the bloc on course to achieve its climate change goals. July’s fatal flash floods across parts of Europe will likely strengthen the resolve of policymakers to act fast.

Another concern raised by the clampdown was whether Chinese regulators might seek to exert even greater control over large Chinese companies. Approval of new Chinese initial public offerings (IPOs) was temporarily halted in the US as more disclosures pertaining to risks to US investors were required. Chinese regulators have since reassured American authorities, as the consequences of losing access to US capital would be negative for China and undermine the gradual liberalisation of the Chinese economy.

The outlook for Chinese equities over the longer term remains promising, although brittle sentiment will prevail until there is clarity in terms of the duration and depth of the regulatory crackdown.

The FTSE JSE All Share Index advanced +4.1% as the commodity and materials sectors drove gains. Naspers and Prosus declined by -5.9% and -7.3% respectively as regulatory concerns in China sent Tencent’s share price tumbling.

To date, approximately 13% of South Africans have been vaccinated against COVID-19. The country was moved to alert level 3 as the number of cases declined. This allowed retailers to resume the limited sale of alcohol for off-site consumption, as well as restaurants for on-site consumption. Gyms, fitness centres and other non-essential establishments were allowed to re-open subject to operating hour restrictions. Interprovincial travel was permitted to resume.

Unfortunately, the news headlines for the month were dominated by extensive rioting and looting that swept through KwaZulu-Natal and parts of Gauteng. The events followed the arrest of former President Jacob Zuma after his failure to testify at the state capture commission. In what quite evidently began as a premeditated assault on the country’s democracy, the rule of law was upheld by the judiciary, even amidst significant political pressure to pardon the former president.

On the economic front, headline inflation declined on a year-on-year basis from 5.2% to 4.9%. We anticipate that inflation numbers will continue a declining trend throughout the rest of the year as low-base effects diminish. Interest rates were kept unchanged at 3.5% by the SA Reserve Bank (SARB) during its July meeting. The June trade balance surplus expanded to R57.7 billion vs. R54 billion. Strong commodity prices led to exports increasing +2% month-on-month to R166.5 billion, while imports decreased to R108.9 billion.

Despite a number of adverse events being thrown at it, most equity markets have delivered strong returns during the first half of the year, hitting all-time highs. A resurgence of COVID-19 cases may lead to a decelerated rebound in countries where vaccination rates are lower, but evidence suggests that a recovery remains intact. Globally, consumers are spurring on growth, while policymakers continue to provide ample support. Robust global economic recovery, coupled with strong earnings, low interest rates and Federal Reserve policy remain supportive of equity markets.

The Iza funds posted moderate gains during July. The Iza Global Balanced Fund gained +0.72% for the month, the Iza Global Equity Fund returned +0.74%, while the Global Stable Portfolio rose by +0.55% for the month. The main performance contributors were Smithson Investment Trust (+4.6%), Catalyst Global Real Estate (+3.9%) and Fundsmith (+3.0%). Catalyst benefited from a general rotation from higher-yielding bonds into REITs (real estate investment trusts) as investors search for attractive alternatives amidst an expected rising interest rate environment. Chinese regulatory concerns weighed on Scottish Mortgage, which gave up -1.1%, while the underweight exposure to US technology companies caused Lindsell Train to decline -2.2% during July. No changes were made to underlying funds. 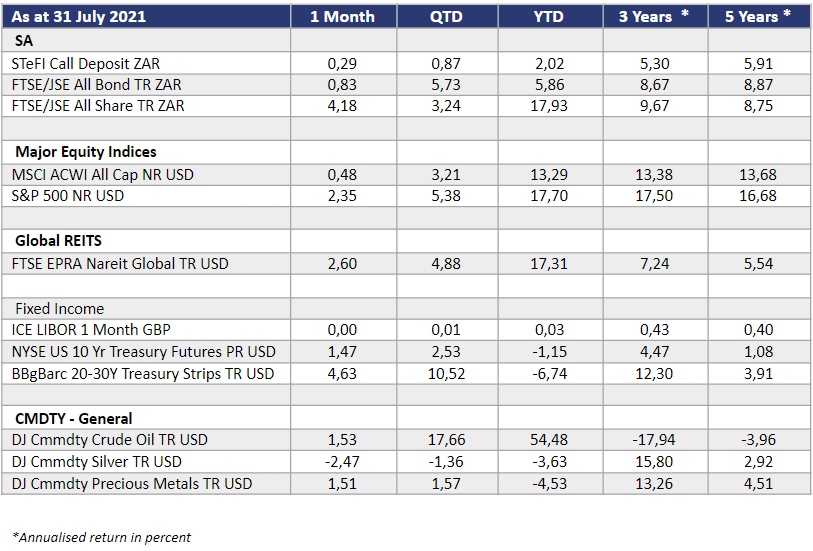