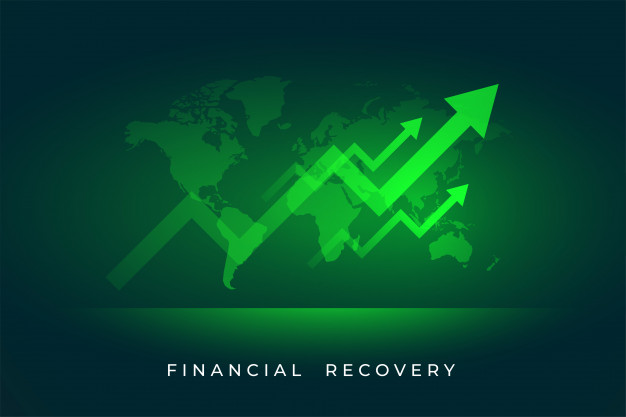 Over the second quarter of 2021, governments in most developed countries continued to relax COVID- 19 confinement measures and economic activity marched ahead. In the UK, nearly 60% of the population have been partially vaccinated. This figure stands at about 50% in Europe and the US. Quarterly economic data has been robust, particularly in the US, boasting an annualised growth rate of 6.4% in the first quarter. The reopening of economies and rapid rebound in activity that has ensued have, however, given rise to inflation in some countries.

Equity indices reached record highs as vaccination campaigns continued to accelerate in most developed markets. The S&P 500 advanced by +2.2% in June (+8.4% QTD and +14.9 YTD), while the Nasdaq closed the month +5.5% higher (+9.5% QTD and +12.5% YTD). In contrast to previous months where US returns were driven by cyclical sectors such as energy and financials, quarter two returns were dominated by growth sectors that were pandemic beneficiaries (such as technology companies, specifically Software as a Service (SaaS)). The prospect of more fiscal stimulus also boosted US markets as President Joe Biden reached a bipartisan deal to boost infrastructure spending by USD 600 billion. The key reason for the rotation from value stocks to growth was as a result of the US Federal Reserve revealing that it believes that at least two rate hikes will be likely by the end of 2023, as opposed to only initiating the rate hike process in 2024. It also increased its inflation and economic projections for the year causing the US 10-year Treasury yield to drop by 30 bps in the quarter, falling to 1.45%, with the decline further helping growth stocks to outperform value stocks. Within interest-bearing markets, investors pursued yield and inflation hedges amidst low sovereign bond yields and higher inflation, favouring inflation-linked bonds, emerging market debt, as well as European high yield bonds. The hawkish Fed announcements led to a strong quarter for the USD, with the US Dollar Index rising just under +3% for the month.

In Europe, equity market indices were buoyed over the quarter by consumer and luxury goods companies such as Adidas, Kering, Louis Vuitton Moët Hennessy (LVMH) and L’Oreal. Germany’s DAX rose +0.7% for the month (+7.3% QTD and +13.2% YTD) and France’s CAC concluded June +0.9% higher (+7.4% QTD and +17.2% YTD). In the UK, the economy contracted by -1.6% during the first quarter, but the FTSE 100 Index proved resilient, posting a +0.2% gain for the month (+4.8% QTD and +8.9% YTD). The lifting of all UK restrictions has been delayed from 21 June to 19 July, at which time it is anticipated that life in the UK will start to resemble pre-pandemic normality.

Asian markets have been under pressure, especially in China, where policy tightening and state regulation of large technology companies have raised concern. The Hang Seng fell -1.1% for the month, but is still +5.9% YTD. Oil and iron ore have led the returns on the commodity front, with oil finishing higher in each of the last five quarters after OPEC signalled strong demand amid managed supply – oil price +52% YTD and iron ore +38% YTD. A stronger US dollar and shift to risk-on appetite weighed on gold during June and is now -7% YTD.

Looking forward, we believe that the outlook for near-term global growth remains strong. As consumer spending starts to wane, spending by businesses and government should continue to support market liquidity and risk appetite. Although we expect financial market volatility during the second half of the year, we anticipate that equity markets will continue their upward trajectory. Seasonality should also be factored into market expectations over the coming quarter. Since 1950 the S&P 500 has had an average gain of +0.7% in Q3. In comparison, Q1 and Q2 averaged +2.2% and +2.1%, respectively, while Q4 has an average gain of +4%. Although US equity benchmarks are trading at record highs, fewer and fewer stocks are driving those gains. The percentage of companies within the index making new highs stands at just 4%.

On the local front, the JSE All Share Index closed flat for the second quarter, but posted a +11.5% return year-to-date. Following months of strong performance, financials and mining companies led the overall -2.5% decline of the local bourse during June. While a decline in US yields buoyed the rand early on in the quarter, the US Federal Reserve’s hawkish interest rate outlook resulted in the local unit closing the month lower against most hard currencies.

Core inflation clocked in at +3.1% YoY, significantly below the headline rate of +5.2% YoY. This indicates that the prices of food and fuel in particular have risen notably over the period. The petrol price has increased by R5 a litre over the past year, or +40% YoY to reach R17.23 by end of May 2021. Unemployment rose to an unenviable record high of 32.6% in the first quarter of 2021. Most of the job losses were in the construction industry.

On a positive note, retailer confidence reached a six-year high of 54 points in the second quarter; up from 37 points the previous quarter. SA GDP grew by an annualised +4.6% in the three months through March from the previous quarter. Output is, however, still down from a year ago with the GDP figure -3.2%. Government announced that companies without a licence to produce its own electricity would be allowed to increase its generation threshold to 100MW. This is supportive of long-term GDP and may alleviate the long-term burden on taxpayers. It was also announced that a majority stake of 51% of South African Airways (SAA) was sold to a private flight operating consortium.

The Iza funds posted resilient returns over the past quarter, outperforming benchmark returns over the period on the back of positive contributions by almost all underlying funds as growth stocks gained momentum. Our philosophy of maintaining overweight allocation to established growth and technology companies paid off. Overall, we remain confident in our underlying managers making up the Iza Fund range and have not introduced any new managers over the quarter. The Iza Global Equity Fund advanced +6.3% MoM; +10.2 QTD and +6.8% YTD (GBP returns). The Iza Global Balanced Fund increased +4.6% MoM; +8.4% QTD and +5.7% YTD (GBP returns), while the Stable Model Portfolio edged up +1.9% MoM; +4.01% QTD and +2.6% YTD (GBP returns).

Fundsmith, which invests in a concentrated number of high-quality, resilient global growth companies that offer good intrinsic value, grew by +6.6% for the month. Lindsell Train gained +3.9% MoM and Smithson added +5% MoM. Smithson invests in small- to medium sized companies, which tend to have higher expected returns but also higher expected risk, defined as price volatility (a measure of how much its price moves over time), when compared to larger companies. However, adding a small/midcap portfolio to a large-cap portfolio can raise expected returns without increasing risk, due to the different risk and return characteristics that small- to medium sized companies provide. Catalyst Global Real Estate returned +4.8%. The star performer was, however, Scottish Mortgage Investment Trust, which surged ahead by +11.4% MoM; +17% QTD.

As we expect more volatility in coming months for both equity markets, as well as fixed income markets, we believe that an allocation to alternatives could help alleviate some of the volatility. The Scottish Mortgage portfolio includes 52 non-listed companies, representing around 22% of its total assets held. These are primarily late-stage investments in the companies. The market value of Scottish Mortgage shares has increased nine-fold (800%) over the past decade and much of this success is attributable to investments held in companies prior to public listings. In the Iza Balanced Fund we have additional alternative investment exposure through structured products (circa 8% allocation), which provide downside protection, whilst offering predetermined return outcomes.

Inflation worries are likely to contribute to market sentiment going forward, but it will take a considerable amount of negative news to shift central banks towards an accelerated withdrawal of “easy money”. As a concluding remark as to the fiery debate on growth versus value, we share the sentiment of Scottish Mortgage fund manager James Anderson –

“It isn’t growth versus value. It isn’t the level of the markets. It isn’t the economic growth rate in 2021 or the progress of the pandemic. It’s understanding change, how it happens, how much happens and its implications” 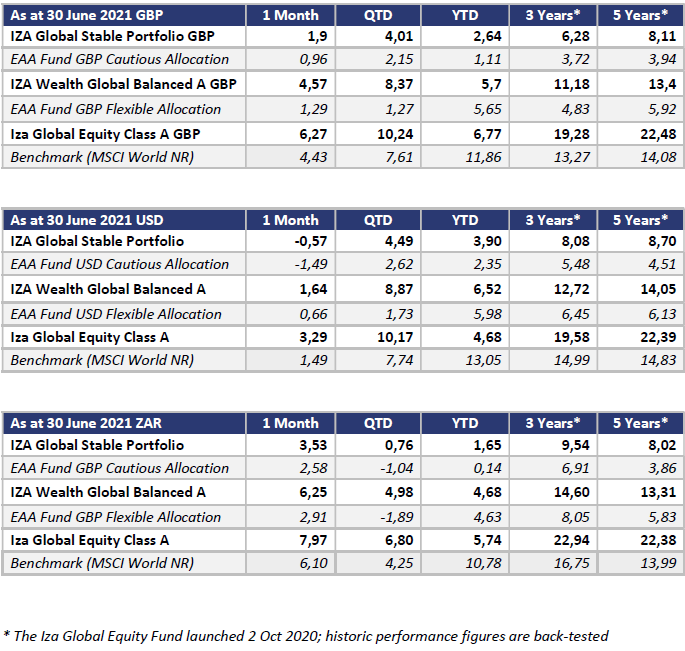 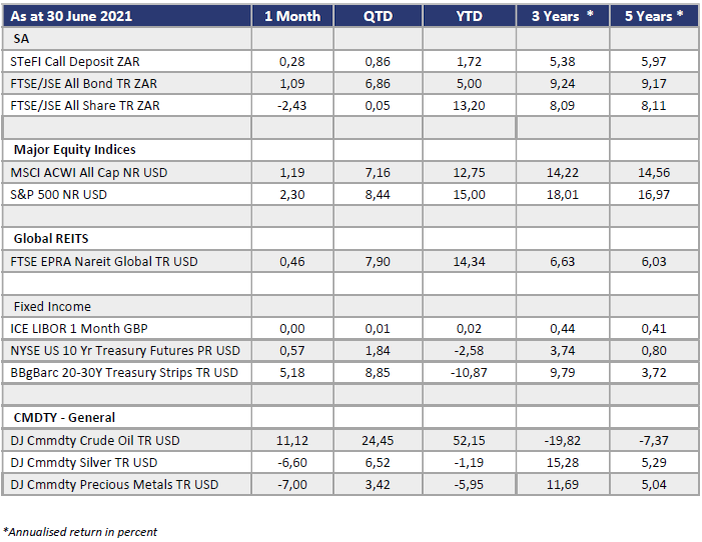