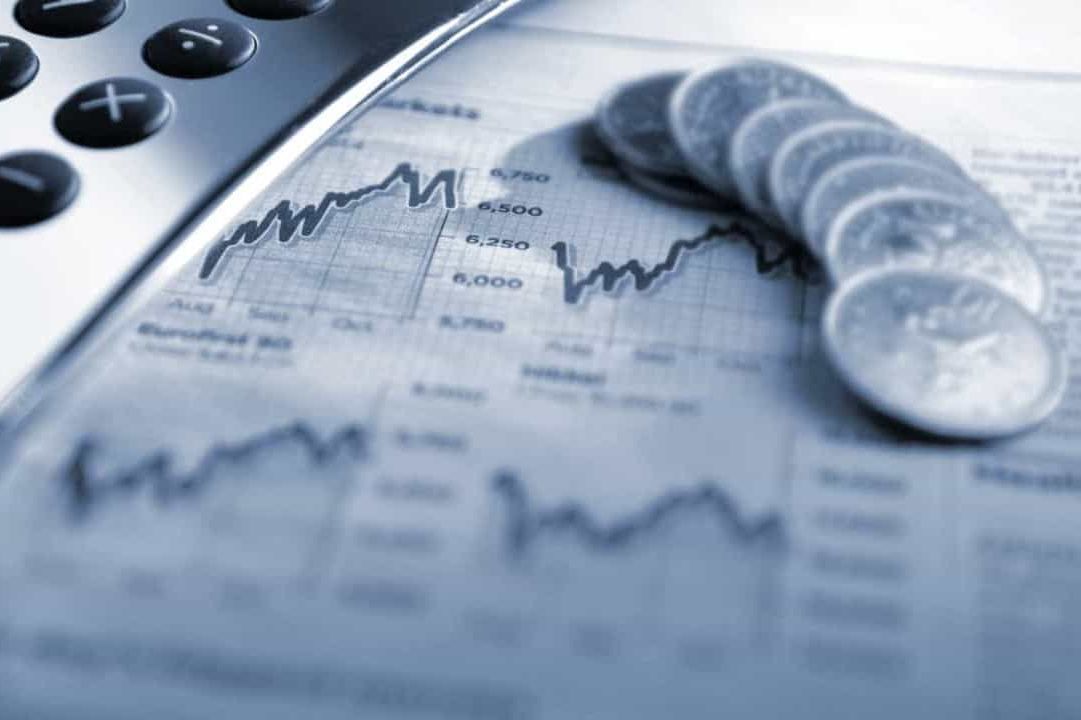 “It isn’t growth versus value, it isn’t the level of markets, it isn’t the economic growth rate in 2021 or the progress of the pandemic, but it is understanding change, how it happens, how much happens and its implications.” – James Anderson, Scottish Mortgage Fund Manager

In April, The MSCI World Index rose 1.5% in May; the fourth consecutive monthly gain for global equities. Cyclical value stocks continued to drive equity markets, extending a trend that has emerged over the past few quarters. On the other hand, technology-heavy sectors that were significant beneficiaries of the pandemic were the worst performers for the month.

First quarter earnings season has drawn to a close, with both US and European companies beating earnings estimates in record numbers. Despite the solid beats and COVID-19 vaccination campaigns gaining momentum, stock price reaction was relatively muted due to a combination of markets pricing in strong earnings, as well as inflation concerns. Market volatility is set to persist over the coming months as inflation concerns and possible subsequent interest rate hikes dominate headlines. This despite the US Federal Reserve consistently indicating that higher inflation is a transitory risk. Higher inflation levels will linger for a while still, which supports investing for sustainable growth to mitigate at least some of the risk posed by a valuation derating.

It is important to note that rising US interest rates in most instances have historically been followed by positive stock market returns, irrespective of the level of the interest rates. Although equity valuations are currently at elevated levels, we maintain that over the medium-term equity offers attractive returns as strong economic growth bolsters corporate earnings.

In the US, President Biden announced a $6 trillion budget plan to run over the next decade that would see increased spending on infrastructure and education. If approved, the plan will likely take the nation to its highest sustained levels of federal spending since World War II. US core inflation for April reached 3% year-on-year, its highest level since 1996. This was well ahead of expectations of 2.3% and exacerbated concerns about the speed at which the US economy is reopening. The surge, however, was largely on the back of a base effect following sharp declines in economic activity at the start of the pandemic. The Federal Reserve indicated that it would not tighten monetary policy despite the high inflation print. As a result, US interest rates remained muted. Coming in well below the expectation of adding 1 million new jobs for the month, only 270,000 jobs were added. The unemployment rate increased to 6.1% from 6%. The S&P500 rose 0.5% for the month, while technology-heavy Nasdaq reported a drop of 1.5%; it’s first monthly drop since October last year.

The FTSE 100 Index gained 0.8% MoM. The Bank of England indicated that the UK economy was set to grow by 5% in the second quarter if COVID-19 restrictions are lifted. It kept its monetary policy unchanged, but announced that it would slow down its purchase of British government bonds from £4.4 billion per week to £3.4 billion, as the government begins to wind down its emergency support programme. The government pushed ahead with the latest easing of lockdown measures amid a rise in infections related to the ‘Indian’ variant of Covid-19. Concerns as to whether the variant might delay the removal of social distancing laws on 21 June did result in some domestically focused sectors giving back some of their recent strong gains.

European markets were driven higher in May as sentiment around economic recovery in the Eurozone reached a three-year high. Germany’s DAX closed 1.9% higher and the French CAC rose 2.8%. Among the bloc’s largest economies, Germany, Italy and Spain fell into contraction territory. This as a result of larger constituent countries in the Eurozone again imposing strict lockdown measures to help curb the spread of the coronavirus pandemic. France’s economy returned to growth after the government delayed the implementation of lockdown. President Christine Lagarde surprised investors by announcing that the European Central Bank was not considering winding down its €1.85 trillion Pandemic Emergency Purchase Programme, reiterating that it will continue to run until at least March next year.

Emerging markets outperformed developed markets, with the MSCI Emerging Markets Index delivering 2.3% and the MSCI World Index returning 1.5%. The spot price of Brent crude oil closed May 3.1% higher from the previous month at around US$69 per barrel. Escalating concerns around inflation, high volatility in cryptocurrencies and a weak USD set the scene for gold to rise nearly 8%. Other commodity prices were mixed: iron jumped 13.6%, copper was up 2.1%, but platinum lost 1.5%, aluminium was down 1.7% and palladium fell 4.9% for the month.

In Asia, the People’s Bank of China left its benchmark interest rates steady for the thirteenth consecutive month, while unemployment continued its downward trajectory, easing to 5.1% in April from 5.3% in the previous month. Risk sentiment improved after delegates from China and the United States met for the first time under the Biden administration, with both parties agreeing to the importance of bilateral trade. On the pandemic front, the Japanese government extended its COVID-19 state of emergency in Tokyo, Osaka and seven other prefectures, but insisted that the Olympics would go ahead as scheduled. Japan’s Nikkei 225 delivered 0.2%, the Shanghai Composite Index jumped by an impressive 4.9% and Hong Kong’s Hang Seng 1.5%.

SA’s FTSE JSE All-Share Index posted a gain of 1.5% for May, driven by financials (+9% MoM), as well as retailers and gold mining companies. The rand appreciated by 5.2% against the USD as weak US economic data weakened the USD and commodity prices rose as economies continue to stage post-lockdown recoveries. As anticipated, the South African Reserve Bank held interest rates steady at a record low of 3.5%, warning that slow progress on vaccinations, limited energy supply and policy uncertainty continue to pose downside risks to the economic outlook. It increased its GDP forecast for 2021 to 4.2% from 3.8%. Its headline inflation forecast for 2021 through to 2023 remains slightly above 4%, but within the bank’s target band of 3 to 6%. April’s trade balance recorded a better-than-expected surplus of R51bn, while exports decreased 3.9% MoM to R161bn and imports declined 4.6% MoM to R110bn.

President Ramaphosa announced the reintroduction of a national level 2 lockdown amid a surge in new COVID-19 infections, stressing that the vaccination programme needs to be stepped up dramatically to meet the government’s vaccination target of 16.6 million people by November. As at the end of May, just under 1 million South Africans had received the vaccine following the commencement of Phase 2 of the rollout earlier in the month.

Both a lack of inflation, as well as excess inflation are detrimental to equity ratings. Inflation of about 2% keeps the economy churning without causing detrimental cost pressures. Very low inflation levels are associated with difficult economic circumstances and low earnings growth, resulting in lower valuation multiples. High inflation levels are associated with more unstable economic circumstances and lower quality of earnings growth, also resulting in lower valuation multiples. Investors have over the past few years become accustomed to almost ideal inflation levels from a valuation perspective. Investors are particularly worried that if inflation does prove to be persistent rather than temporary, then central banks might have to raise interest rates quickly to slow down an economy that is running too hot. This concern has created some market volatility over the past month. However, we believe that equities should do well in an environment of modestly rising inflation, as rising sales tend to offset higher input prices, which can be passed onto customers when demand is strong.

The Iza funds declined in May, with the Global Balanced fund down 1.2%, Global Equity fund losing 2.2% and the Global Stable fund giving up 0.5%. The positive contribution of the Gold ETF (+5%) and Lindsell Train (+0.4) was offset by the monthly losses posted by the tech-heavy Scottish Mortgage (- 5.1%) and Smithson Investment Trust (-4.3%), which focuses on small-cap growth stocks. Global property fund manager Catalyst eked out a +0.5% gain for the month. We anticipate that cyclical value stocks will continue to dominate equity market performance over the coming quarters. To this end, we have allocated 7% of the Iza Global Balanced fund to the iShares S&P500 Core Value ETF (+0.8%). Its inclusion will enhance diversification and provide tactical exposure to defensive value sectors such as financials, health care and industrials. The purchase was made from cash reserves. No constituent changes were made to the Iza Equity fund as we remain committed to following a long-term buy-and-hold growth strategy irrespective of short-term market volatility. 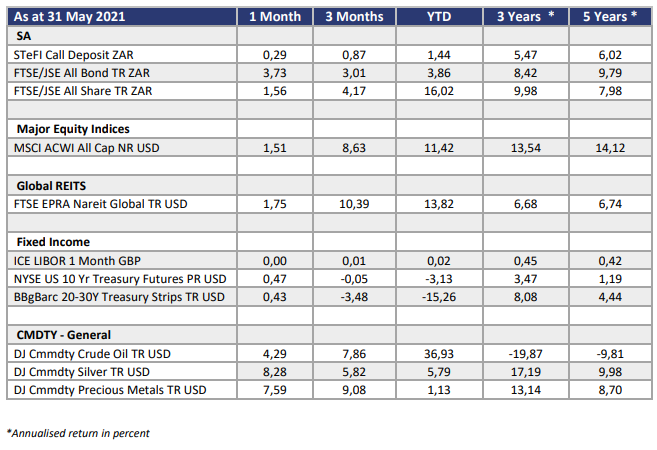