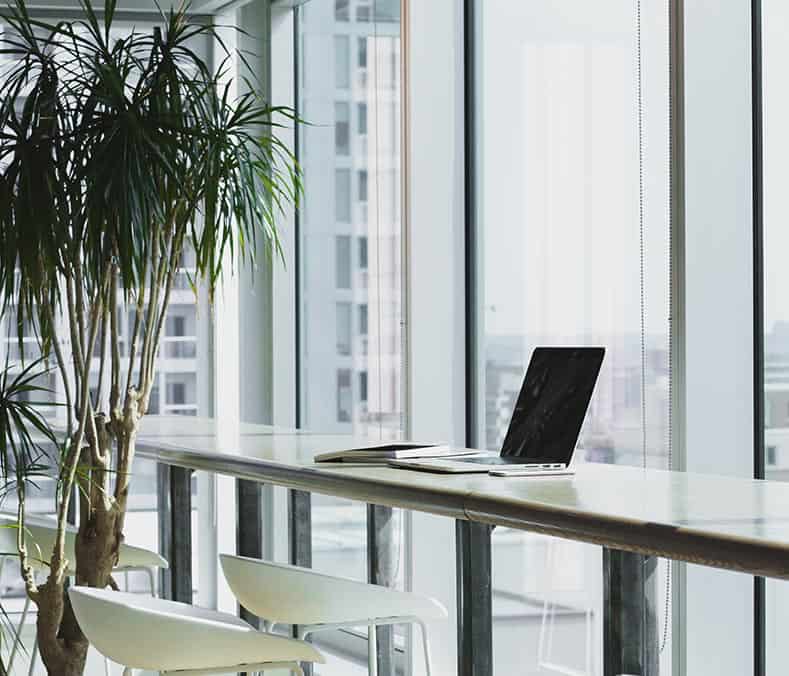 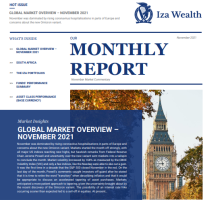 November was dominated by rising coronavirus hospitalisations in parts of Europe and concerns about the new Omicron variant. Markets started the month off strongly, with all major US indices reaching new highs, but hawkish remarks from Federal Reserve Chair Jerome Powell and uncertainty over the new variant sent markets into a tailspin to conclude the month. Market volatility increased by +68% as measured by the CBOE Volatility Index (VIX) and only a few indices, like the Nasdaq were able to eke out a gain. It was the first time in a decade that the S&P 500 closed November in the red. On the last day of the month, Powell’s comments caught investors off guard after he stated that it is time to retire the word “transitory” when describing inflation and that it would be appropriate to discuss an accelerated tapering of asset purchases. Markets anticipated a more patient approach to tapering, given the uncertainty brought about by the recent discovery of the Omicron variant. The possibility of an interest rate hike occurring sooner than expected led to a sell-off in equities.

At present, it remains uncertain whether the mutations in the Omicron variant will significantly reduce the effectiveness of existing vaccines in preventing hospitalisations. This is a key issue to monitor over the coming weeks. Vaccine manufacturers have, however, indicated that even if vaccine efficacy is significantly reduced, they could produce new vaccines within about three months. New antiviral pills have also been developed that could further alleviate hospitalisations, once they are made available within coming months. It is unlikely that equities would experience the same degree of declines that were seen at the start of the pandemic when it was uncertain whether vaccines would materialise.

In the US, the S&P 500 ended November down -0.8%, while the Dow Jones lost -3.7%. The technology-heavy Nasdaq managed a small gain of +0.3% for the month. US inflation (CPI) clocked in its highest reading in 31 years, at 6.2% year-on-year. Strong retail sales of +1.7% in October suggest that inflation will remain at buoyed levels for longer than was generally anticipated, but that concerns over inflation remain outweighed by other factors such as the strength of the labour market.

On the policy front, Jerome Powell was reappointed for another four-year term as Federal Reserve Chairman, which was well-received by the markets. Monthly bond purchases are currently expected to be reduced from $120 billion to zero by mid-2022. Several Fed members have talked about accelerating the pace of tapering, but uncertainty around Omicron could now make that less likely in the shorter term. Finally, President Biden signed a $550 billion bipartisan infrastructure bill to upgrade America’s roads, bridges and railways and deploy electric vehicle charging stations across the country.

Economic momentum remained strong in the UK thanks to the fact it has so far been less affected by the latest COVID-19 wave. In this context, consumer confidence and retail sales increased, in contrast to what has been observed in the rest of Europe. The FTSE All-Share fell -2.2%. Gilts rallied on the back of the Bank of England’s (BoE) decision to keep rates on hold in November and on concerns that Omicron could further delay rate rises. Sterling also depreciated against hard currencies over the month.

In Europe, several countries have already reintroduced new mobility constraints to curb the spread of the virus. These measures, together with inflation reaching 4.1% year-on-year in October, have weighed on consumer sentiment, which has decreased slightly in recent months, but remains at pre-COVID-19 levels. COVID-19 concerns led European equities to decline over the month and government bonds rallied. Germany’s DAX fell -3.8%, while France’s CAC Index declined by -1.6%.

China’s retail sales were ahead of expectations, rising +4.7% year-on-year in October along with news of record sales being generated during Singles Day. Alibaba alone reported gross merchandise volume of $84.5 billion for the shopping event. Nevertheless, China’s economy continued to slow last month, with car and homes sales dropping once again as the country’s housing market crisis dragged on. While emerging markets’ economic backdrop improved over the last couple of weeks, emerging market equities and debt posted negative returns of -4.1% and -1.4%.

The blockbuster news was that the Omicron variant was discovered by South African scientists at the same time daily cases started increasing, which led to fears of a fourth wave in December and travel restrictions being imposed by various countries on Southern African nations. Despite this and further loadshedding weighing on economic growth, the FTSE JSE All Share Index bucked the global market trend and advanced by +4.5% during November, with mining shares driving the bulk of the gains. Naspers and Prosus declined by -5.1% and -2.9% respectively. The rand depreciated by -4.2% against the US dollar and -2.1% against the pound.

In political news, the ANC obtained 46% of votes during local government elections, falling below the 50% mark for the first time since 1994. On the economic front, October annual headline inflation remained unchanged at 5% year-on-year and the Reserve Bank raised the repo rate by 0.25% to 3.75%.

Fiscal consolidation through expenditure restraint and growth initiatives will be tested over the coming years when elevated commodity prices no longer serve as a revenue windfall. It is, however, unlikely that a reduction in government debt is on the horizon. Many of the growth initiatives were lacking in detail and execution risk remains on both sides of the fiscal equation.

During November, 2% of the Iza Global Balanced Fund was allocated to the Clearance Camino Fund. Camino is a European real estate securities fund with a diversified, liquid portfolio of best opportunities. The fund has a focus on asset quality, income sustainability and growth, capital structure and management capability. The fund has proven to be an effective inflation hedge and has delivered a +14% annualised return since inception in 2013, outperforming its benchmark by +4.9% per annum, with lower volatility.

The risk of a COVID-19 resurgence and potential effect of the new strain, if it is shown to evade existing vaccines, unnerved markets in November, despite strong economic data. By the end of the year, it should become apparent whether the Omicron variant will materially disrupt what would otherwise be a positive economic outlook.

We expect positive growth and for inflation to remain above central banks’ targets during 2022. While monetary policy should become less favourable in 2022, we believe that the normalisation process will be gradual and that fiscal policies will remain accommodative as a whole. 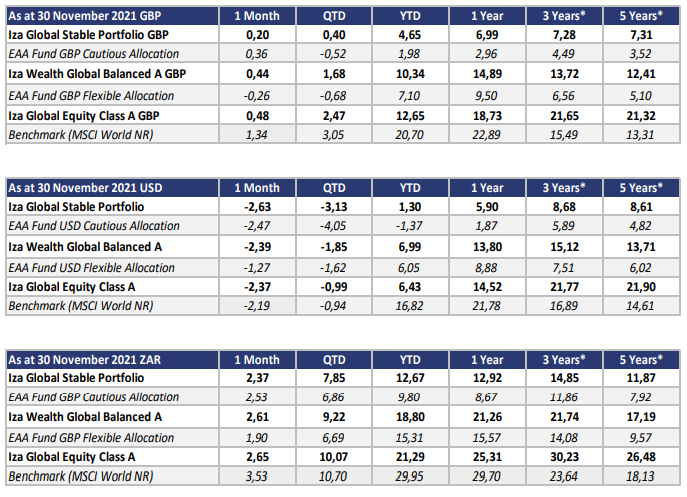 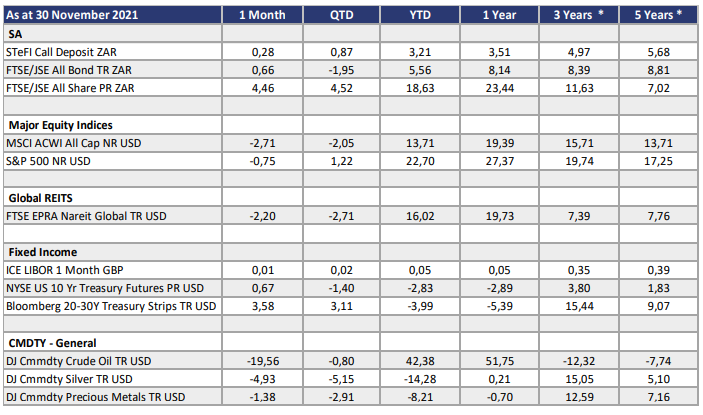