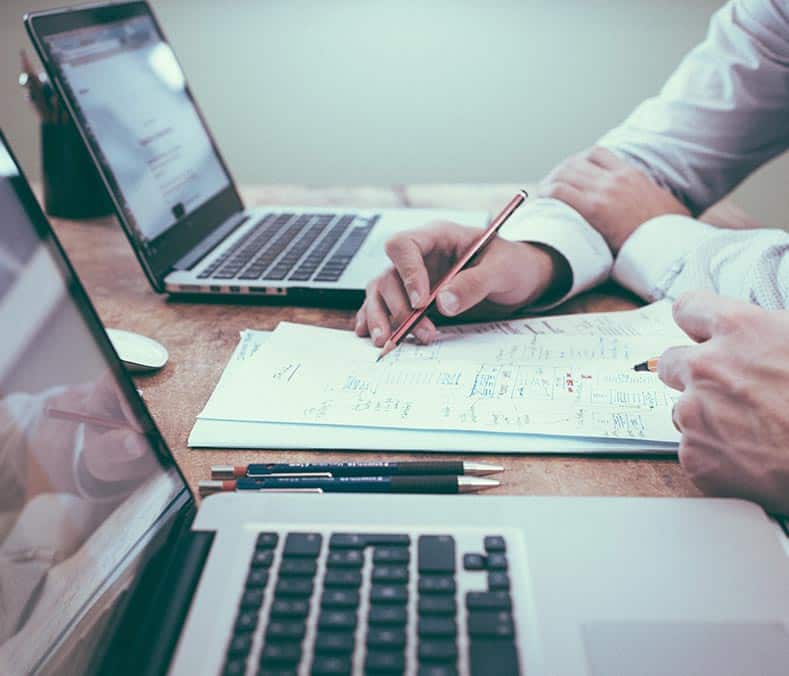 A business cycle refers to the fluctuations or pace in the overall level of economic activity, with Investopedia defining the economic cycle as: “the natural fluctuation of the economy between periods of expansion (growth) and contraction (recession). There is no clear-cut motive for the causes of these fluctuations. The monetarist school of economic thought ties the economic cycle to the credit cycle, whereby the Keynesian approach argues that changes in aggregate demand, spurred by inherent instability and volatility in investment demand, is responsible for generating cycles.” When investors make the statement of identifying where in the cycle we are, the investor is making comparisons against this stylised reference cycle.
There are four stages of the economic cycle:
1. Expansion: The real GDP of an economy is expanding at an increasing rate.
2. Peak: The real GDP of an economy has increased, at a marginally slow rate, and is now reaching a high point.
3. Contraction: The real GDP of an economy decreases; two consecutive negative quarters of GDP contraction indicate a recession. GDP may also contract, but still be positive (grow, just albeit at a slower rate)
4. Trough: The economic contraction slows down, and is now reaching a low point.
Recessions often bring about destructive portfolio losses and uncomfortable draw-downs. Avoiding these losses will help preserve your capital and can significantly boost portfolio performance. Although you can’t time the market, you can improve your returns by knowing where we are in the business cycle, and adjusting asset allocation to take advantage of these phases.

Knowing which phase we are in is achieved by the monitoring of leading and coincident indicators. Shifts in these economic indicators will describe the movements of the market cycle through the phases. Inflation rates, interest rates, unemployment, consumer confidence and business confidence indices are but a few of the indicators closely monitored for any movement.

The SARB declared: “Having duly considered all the available information, the final reference date for the upper turning point in the South African business cycle was established in November 2013”. This meant that December 2013 was the first month of a downward cycle in South Africa’s economy. The cycle continued on its downward trajectory until Q4 2016. This was the longest economic downturn (when compared to the 32-month average) since 1974. The indicators have shifted into the Trough phase indicating that the contraction has slowed and has entered a low growth phase.

As of June 2017, the economy is in the expansion phase as it has been for the past eight years since June 2009. This is the third longest in U.S. history in 33 business cycles going back to 1854. Historically, expansion phases last five years or so, however we see no signs of the economy reaching its peak as
inflation remains low. Once inflation picks up and subsequently interest rates start to rise, we will begin to see a slowdown in the economy. Q2 2017 to Q32017 showed positive moves in retail and vehicle sales with more confidence amongst consumers making for a more prominent expansion
phase in Q3 2017. In a recent note by Goldman Sachs economists, they said their model shows a 31 percent increased chance for a U.S. recession in the next nine quarters.

United Kingdom
The UK economy remains in a strong expansion phase with unemployment
decreasing to 4.3%. There are also signs the economy is heading to a peak phase with GDP continuing to expand and corporate profits starting to come under pressure. It however should be noted that economies don’t move in an orderly like fashion, whereby one phase of the cycle is followed by the next phase. It’s entirely possible for economies to miss a phase. This could happen to the UK economy if the Bank of England keeps raising rates to combat inflation, pushing the economy back into a recession missing its peak as Britain’s citizens find themselves becoming poorer and poorer failing to create the demand needed to continue on its expansion trajectory.

The economic expansion that started after the Q1 2013 trough and has since proceeded at a slow but steady pace in terms of GDP growth rate. Indicators portray a picture of an ever-expanding economy with no clear indication of when the economy might hit its peak. Beyond knowing where in the business cycle we are as investors, it is easily argued that knowing what to expect next is more important; this is why researching expected asset class returns in each segment of the cycle is important. Further to this, it is prudent to note that economic participants have witnessed economic policy being applied as has never been done before; this calls for intellectual rigour when considering
macro-economic variables.

The unemployment rate fell to 4.1%, its lowest level since October 2000. Earnings were up 2.4% year-on-year which will provide strong support to consumer spending throughout the rest of the year. The Federal Reserve kept its interest rate range unchanged at 1% to 1.25%, citing strong growth as a reason. President Donald Trump named Jerome Powell to follow Janet
Yellen as chair of the Federal Reserve. The House tax reform bill was released with proposals to lower the corporate tax rate to 20%. Meanwhile, the fourth round of NAFTA talks drew to a close in mid-October as the parties struggled to reach consensus on contentious topics.

The Bank of England raised interest rates for the first time in over a decade from 0.25% to 0.5%. The minutes of the Monetary Policy Committee meeting cited signs of a pick-up in “domestic inflationary pressures” as the reasons for the move. UK inflation climbed to 3%, a level it last reached in April 2012 and
is now 0.9% above wage growth. In order to boost the purchasing power of young people, the government recently promised GBP 10 billion to help them purchase a home, and announced a more generous system of tuition fee repayments. Unemployment has remained at 4.3% with both the manufacturing and services PMIs staying well in expansionary territory in September.

Eurozone’s economy continued to expand in the third quarter of 2017. Economic sentiment jumped to an over 10-year high in September and the unemployment rate is hovering at a multi-year low. Further to this ECB President Mario Draghi announced it will curb its bond buying from January to a pace of 30 billion euros until at least September 2018. This will allow the ECB to start a gentle exit from the QE program, without seeing the euro appreciate or bond yields increase. The ECB has been running its bond buying at a pace of 60 billion euros ($70 billion) per month as the central bank attempted to increase growth and inflation among euro zone member countries.

China’s economy grew by 6.8% YoY in the third quarter, in line with  expectations. In his opening speech at the Communist Party’s National Congress, Chinese President Xi Jinping conveyed a positive view of the
economy and indicated that China will move forward with reforms aimed at further opening its market to foreign investors. During the congress, a new guiding ideology, labelled Xi Jinping Thought on Socialism with Chinese Characteristics for a New Era, was written into the party’s constitution. Xi will
start his second term with an economy performing strongly due to healthy external demand and solid activity at home.

On October 25th 2017, Finance Minister Malusi Gigaba presented his first Medium Term Budget Policy Statement (MTBPS) since taking office earlier this year. Minister Gigaba revised down SA economic growth forecast for 2017 from 1.3% to 0.7%, however projecting the economy to recover slowly reaching 1.9% GDP growth by 2020, this depending on SA increasing business
confidence, improving their investment outlook and growing exports according to chief economist Kevin Lings of Stanlib. Government is projecting a total revenue shortfall of R50.8 billion in 2017/18. Furthermore, political noise is set to remain elevated in the foreseeable future as the country gears up for the ANC Conference in December, when a new presidential candidate for next year’s election will be chosen.