Can America Power Through?

The mood for the month was set on its first day with a tweet from the US president announcing an intention to impose a 10% tariff on the remaining approximately USD 300 billion of Chinese imports that were not yet subject to tariffs. This decision took markets by surprise as China and the US had agreed a ceasefire in their trade dispute at the G20 in May. The announcement of new tariffs triggered retaliatory measures from China, which announced three weeks later that it would also increases tariffs on roughly USD 75 billion of US imports, including agricultural goods, crude oil and cars. This led the US president to tweet that the existing and planned tariff rates will both rise by 5 percentage points.

It was only at the end of the month that both countries adopted a slightly more conciliatory tone but the damage to business and investor sentiment had already been done. The renewed escalation of trade tensions and the growing economic consequences triggered profit-taking in global equity markets in August.

Developed market equities dropped 1.9% but outperformed their emerging market (EM) peers as the MSCI EM Index dropped by 2.5%. The number of news stories in August that included the word “recession” hit a new high. The question is are these concerns overblown when unemployment is at all-time lows, US consumer is healthy based on recent retail sales and the majority of the developed world is now on a path of easing again. As the old adage goes “the bull market doesn’t die of old age, it dies because the Fed kills it” and there is no sign of that yet.

Safe havens were sought after by investors and global bond yields continued to decrease, bringing the total market value of negative yielding debt in the Bloomberg Barclays Global Aggregate Index to over USD 16 trillion. Fixed income segments with positive real yields rallied, including 30-year US Treasuries, whose yields dropped below 2% for the first time, and global investment grade corporate credit, which delivered 1.9% over the month.

10-year UK Gilt yields also continued to rally through August on the back of growing Brexit uncertainties, ending the month 13 basis points lower at 0.48%. In foreign exchange markets, while the US dollar remained stable on a trade-weighted basis, it rallied versus most EM currencies, gaining 4.0% against the Chinese renminbi and 3.8% against the Indian rupee.

In the US, after the Federal Reserve (the Fed) cut rates by 25 basis points at the end of July, the August headlines were once again dominated by trade tensions but also increasingly by the risk of an economic downturn. Indeed, most recent economic data releases have shown that the US economy is not immune to global trade tensions. The manufacturing part of the economy remains the weak spot as shown by the drop in the August flash US Manufacturing purchasing managers’ index (PMI) to 49.9, its lowest reading since September 2009. There are also increasing signs that the manufacturing weakness is spreading to other areas of the economy as the flash Services Business Activity index fell to a three-month low of 50.9.

The drop in consumer confidence has probably been driven to a large extent by the extensive media commentary on the increased risk of a recession, following the inversion of the US yield curve, which first occurred in mid-August. However, domestic demand has so far remained relatively resilient, with retail sales jumping 0.7% in July, showing that so far the strength of the labour market and rising wages continue to outweigh trade and recession concerns.

In this context, we continue to believe that the US economy is slowing, not stalling. Jerome Powell’s Jackson Hole speech was largely in line with expectations and paves the way for the Fed to make another 25 basis point rate cut in September followed perhaps by one more rate cut at either the October or December meetings. This move should be welcomed by US corporates as it will lower their financing costs at a time when margins are under pressure from lower top-line revenue growth and higher wage costs.

In Europe, the August headlines were dominated by weak economic data, especially in Germany, and by increasing political uncertainties. On the economic front, the second-quarter GDP releases confirmed the economic slowdown in Europe, as growth was left unrevised at just 0.2% compared to the prior quarter. The country level detail showed that Germany is now on the verge of a recession, as its economy contracted by 0.1% in the second quarter, while the Bundesbank expects the downturn in orders for cars and industrial equipment to continue in the third quarter. The fall in the IFO business climate index later in the month further confirmed this weak outlook. This economic slowdown has fuelled stimulus hopes and the German finance minister has left the door open to a possible fiscal package if the situation deteriorates further.

Overall though, the latest release of the flash composite PMI for the eurozone showed that growth stabilised in August, which confirms our view that Europe’s economy is slowing but not yet approaching a recession, with the service sector continuing to grow. Meanwhile, in the UK, Boris Johnson has so far not managed to solve the Brexit impasse. Brexit is already weighing on the UK economy, with second-quarter GDP shrinking by 0.2%, while the outlook for retail sales has weakened according to the CBI’s August survey.

All eyes have been on China since the beginning of the year and the country has taken several measures to counterbalance the effects of the trade war on its economy. However, even though Chinese authorities have this time delivered both fiscal and monetary stimulus, the results have so far been mixed as July data, including retail sales, came in short of expectations.

In this context, the Chinese authorities were obliged to take additional stimulus measures in August. The People’s Bank of China announced a lending rate reform to lower financing costs and let the renminbi break the psychological barrier of 7 versus the US dollar. The currency move triggered an official condemnation from the US, who labelled China a currency manipulator.

September has provided some respite for markets with both sides appearing eager to make a deal. Trump is fully focussed on the election next year and speculation is that these recent moves on the trade front  have been done to pressure the Fed into lowering rates , a key catalyst for higher stock markets. He does however have to balance that against pushing the economy into recession which everyone was concerned with in August.

The Fund and portfolios ended the month down, largely on the back of the equity market sell off affecting names like  Scottish Mortgage and Brexit concerns impacting the UK REIT holdings within the Iza Global Balanced Fund. Both Rubrics Global Credit and Capital protected notes ended the month slightly positive and Lindsell Train bucked the trend for the equity box by being up in an otherwise difficult month for risk assets. The next 12 months are likely to be bumpy with the back and forth around trade war, but easing monetary policy globally, bottoming in the slowdown in manufacturing and historic lows in rates make equities attractive and likely to see further highs which will benefit the funds equity book. Below shows how manufacturing PMI is closely linked to monetary conditions, which have eased of late

Three of the equity funds used in the various portfolios appeared in the “TOP 100 global growth funds” published in September by Investment Chronicle. To offset  geopolitical risk like the trade war, hedge against a weaker dollar, upside surprise in inflation  and capitalise on negative rates, we are considering the inclusion of some gold exposure and will include more detail on this in next month’s commentary. 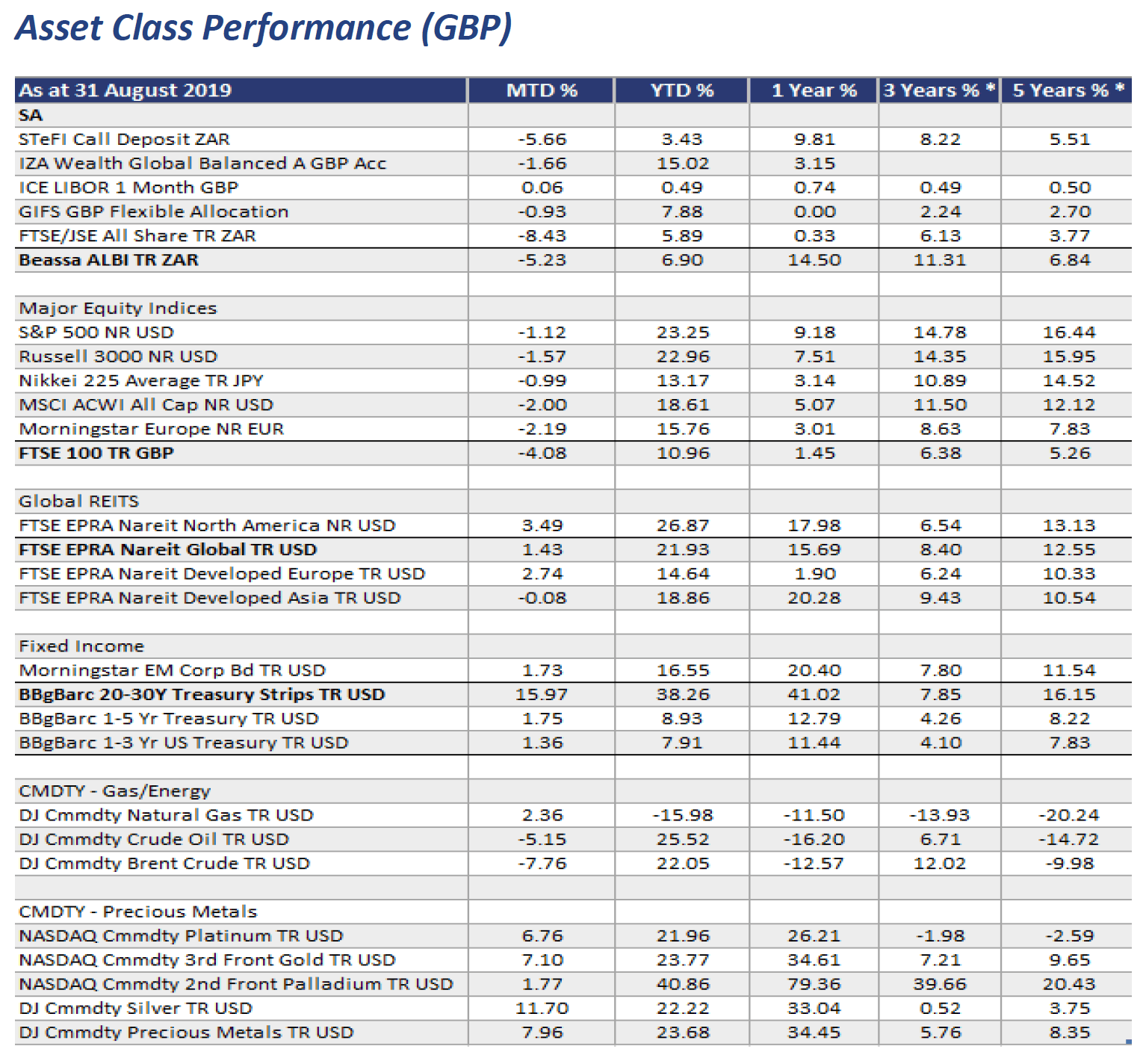