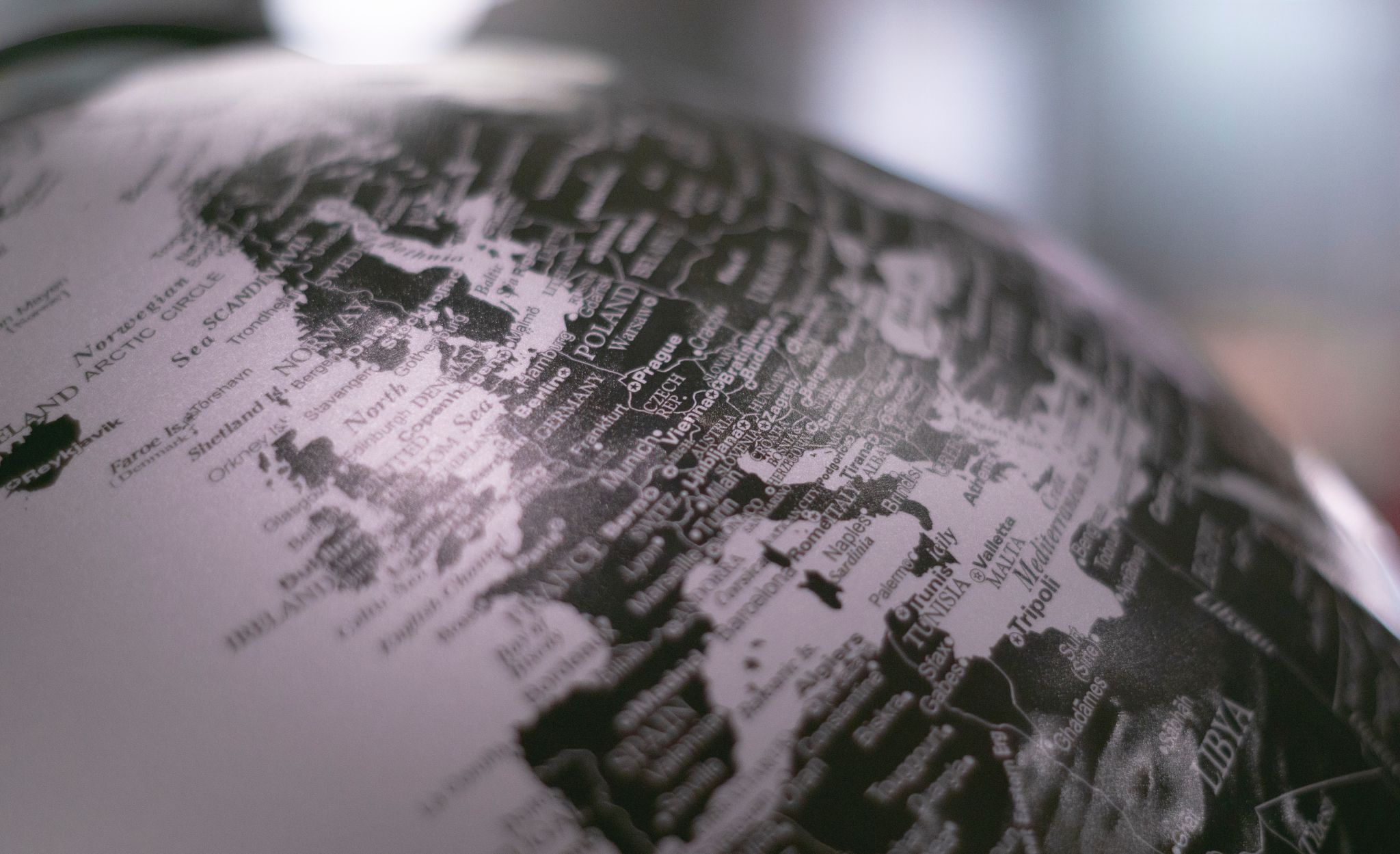 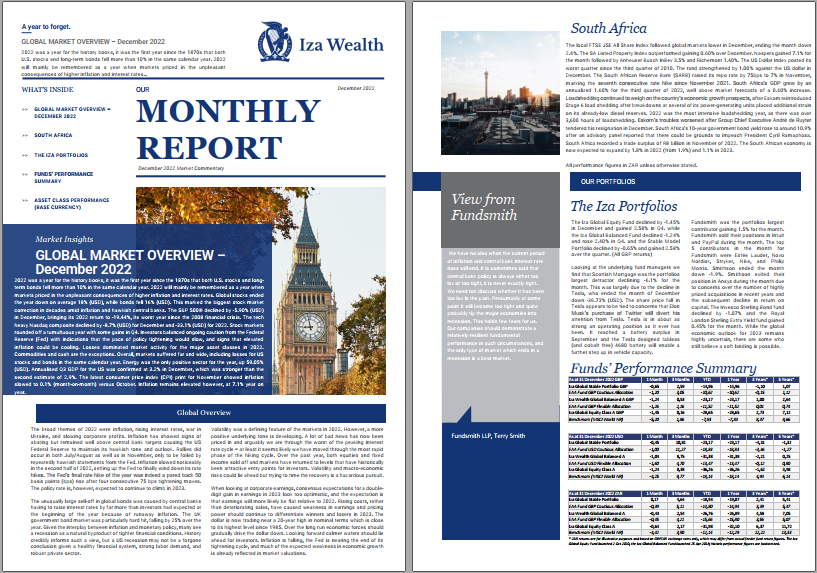 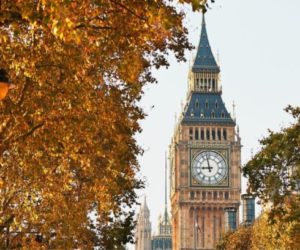 2022 was a year for the history books, it was the first year since the 1870s that both U.S. stocks and long-term bonds fell more than 10% in the same calendar year. 2022 will mainly be remembered as a year when markets priced in the unpleasant consequences of higher inflation and interest rates. Global stocks ended the year down on average 18% (USD), while bonds fell 16% (USD). This marked the biggest stock market correction in decades amid inflation and hawkish central banks. The S&P 500® declined by -5.90% (USD) in December, bringing its 2022 return to -19.44%, its worst year since the 2008 financial crisis. The tech heavy Nasdaq composite declined by -8.7% (USD) for December and -33.1% (USD) for 2022. Stock markets rounded off a tumultuous year with some gains in Q4. Investors balanced ongoing caution from the Federal Reserve (Fed) with indications that the pace of policy tightening would slow, and signs that elevated inflation could be cooling. Losses dominated market activity for the major asset classes in 2022. Commodities and cash are the exceptions. Overall, markets suffered far and wide, including losses for US stocks and bonds in the same calendar year. Energy was the only positive sector for the year, up 59.05% (USD). Annualised Q3 GDP for the US was confirmed at 3.2% in December, which was stronger than the second estimate of 2.9%. The latest consumer price index (CPI) print for November showed inflation slowed to 0.1% (month-on-month) versus October. Inflation remains elevated however, at 7.1% year on year.

The broad themes of 2022 were inflation, rising interest rates, war in Ukraine, and slowing corporate profits. Inflation has showed signs of abating but remained well above central bank targets causing the US Federal Reserve to maintain its hawkish tone and outlook. Rallies did occur in both July/August as well as in November, only to be foiled by repeatedly hawkish statements from the Fed. Inflation slowed noticeably in the second half of 2022, setting up the Fed to finally wind down its rate hikes. The Fed’s final rate hike of the year was indeed a pared back 50 basis points (bps) rise after four consecutive 75 bps tightening moves. The policy rate is, however, expected to continue to climb in 2023.

The unusually large sell-off in global bonds was caused by central banks having to raise interest rates by far more than investors had expected at the beginning of the year because of runaway inflation. The UK government bond market was particularly hard hit, falling by 25% over the year. Given the interplay between inflation and monetary policy, many see a recession as a natural byproduct of tighter financial conditions. History credibly informs such a view, but a US recession may not be a forgone conclusion given a healthy financial system, strong labor demand, and robust private sector.

Volatility was a defining feature of the markets in 2022. However, a more positive underlying tone is developing. A lot of bad news has now been priced in and arguably we are through the worst of the peaking interest rate cycle – at least it seems likely we have moved through the most rapid phase of the hiking cycle. Over the past year, both equities and fixed income sold off and markets have returned to levels that have historically been attractive entry points for investors. Volatility and macro-economic risks could lie ahead but trying to time the recovery is a hazardous pursuit.

When looking at corporate earnings, consensus expectations for a double-digit gain in earnings in 2023 look too optimistic, and the expectation is that earnings will more likely be flat relative to 2022. Rising costs, rather than deteriorating sales, have caused weakness in earnings and pricing power should continue to differentiate winners and losers in 2023. The dollar is now trading near a 20-year high in nominal terms which is close to its highest level since 1985. Over the long run economic forces should gradually drive the dollar down. Looking forward calmer waters should lie ahead for investors. Inflation is falling, the Fed is nearing the end of its tightening cycle, and much of the expected weakness in economic growth is already reflected in market valuations.

The local FTSE JSE All Share Index followed global markets lower in December, ending the month down 2.4%. The SA Listed Property Index outperformed gaining 0.60% over December. Naspers gained 7.1% for the month followed by Anheuser Busch InBev 3.5% and Richemont 1.40%. The US Dollar Index posted its worst quarter since the third quarter of 2010. The rand strengthened by 1.00% against the US dollar in December. The South African Reserve Bank (SARB) raised its repo rate by 75bps to 7% in November, marking the seventh consecutive rate hike since November 2021. South Africa’s GDP grew by an annualized 1.60% for the third quarter of 2022, well above market forecasts of a 0.60% increase. Loadshedding continued to weigh on the country’s economic growth prospects, after Eskom reintroduced Stage 6 load shedding after breakdowns at several of its power-generating units placed additional strain on its already-low diesel reserves. 2022 was the most intensive loadshedding year, as there was over 3,600 hours of loadshedding. Eskom’s troubles worsened after Group Chief Executive André de Ruyter tendered his resignation in December. South Africa’s 10-year government bond yield rose to around 10.9% after an advisory panel reported that there could be grounds to impeach President Cyril Ramaphosa. South Africa recorded a trade surplus of R8 billion in November of 2022. The South African economy is now expected to expand by 1.8% in 2022 (from 1.9%) and 1.1% in 2023.

We have no idea when the current period of inflation and central bank interest rate rises will end. It is sometimes said that central bank policy is always either too lax or too tight, it is never exactly right. We need not discuss whether it has been too lax in the past. Presumably at some point it will become too tight and quite probably tip the major economies into recession. This holds few fears for us. Our companies should demonstrate a relatively resilient fundamental performance in such circumstances, and the only type of market which ends in a recession is a bear market.

Looking at the underlying fund managers we find that Scottish Mortgage was the portfolios largest detractor declining -6.1% for the month. This was largely due to the decline in Tesla, who ended the month of December down -36.73% (USD). The share price fall in Tesla appears to be tied to concerns that Elon Musk’s purchase of Twitter will divert his attention from Tesla. Tesla is in about as strong an operating position as it ever has been. It reached a battery surplus in September and the Tesla designed tabless (and cobalt free) 4680 battery will enable a further step up in vehicle capacity.

Fundsmith was the portfolios largest contributor gaining 1.5% for the month. Fundsmith sold their positions in Intuit and PayPal during the month. The top 5 contributors in the month for Fundsmith were Estée Lauder, Novo Nordisk, Stryker, Nike, and Philip Morris. Smithson ended the month down -1.9%. Smithson exited their position in Ansys during the month due to concerns over the number of highly priced acquisitions in recent years and the subsequent decline in return on capital. The Invesco Sterling Bond fund declined by -1.07% and the Royal London Sterling Extra Yield fund gained 0.45% for the month. While the global economic outlook for 2023 remains highly uncertain, there are some who still believe a soft landing is possible. 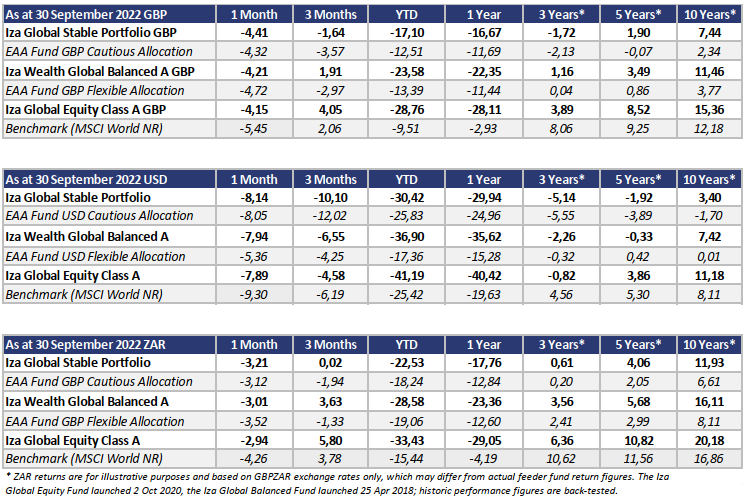 The S&P 500’s performance in 2022 was its seventh worst since inception and the third worst since 2000, but there is a silver lining: since 1928, the index has only delivered consecutive years of negative returns eight times. History may be on investors side as positive S&P 500 annual returns have followed a down year more than two-thirds of the time. Source: Bloomberg and Goldman Sachs Asset Management. As of December 31, 2022. 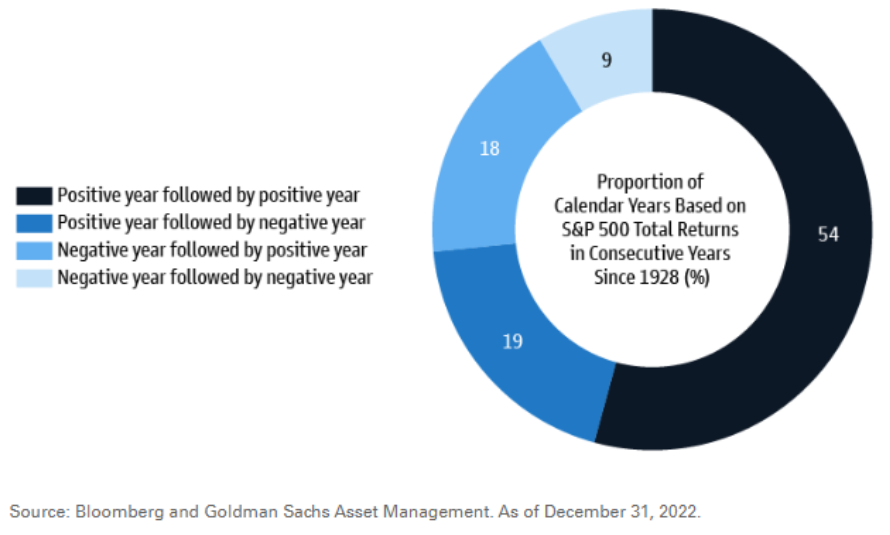 Following excessive growth in one area of the economy – most commonly business investment or housing – it has often taken a long time for the economy to adjust and find alternative sources of growth. However, this time round, investment and housing growth has been more modest.

Periods of “recession” are defined using US National Bureau of Economic
Research (NBER) business cycle dates. Data as of 31 October 2022. 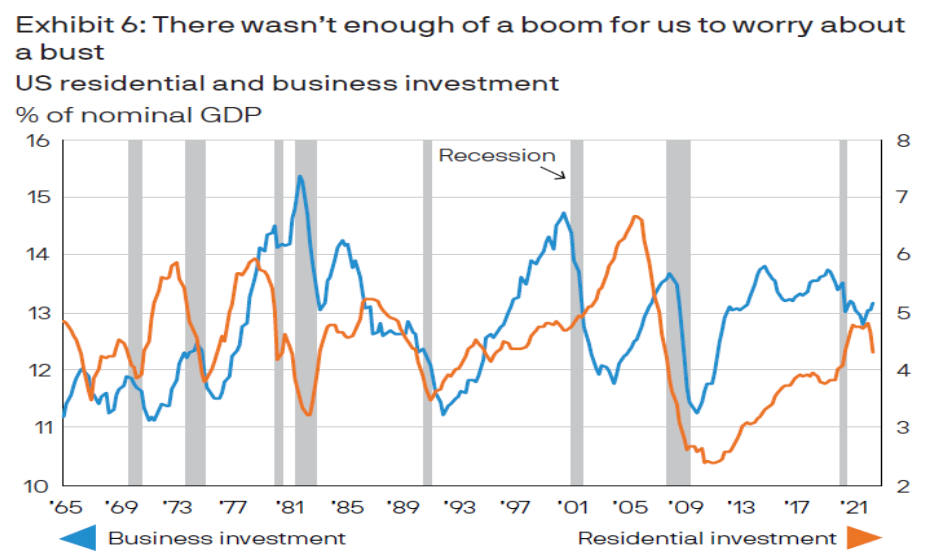 The major theme of 2022 was rising inflation that reached 9.1% in June. Looking ahead there are convincing signs that a sustained inflation downtrend is underway. Looking at the components of inflation, the major hotspots from earlier this year have now simmered down. The noticeable slowdown in inflation is finally setting up the Fed to wind down its rate hikes. Source: J.P. Morgan Asset Management. 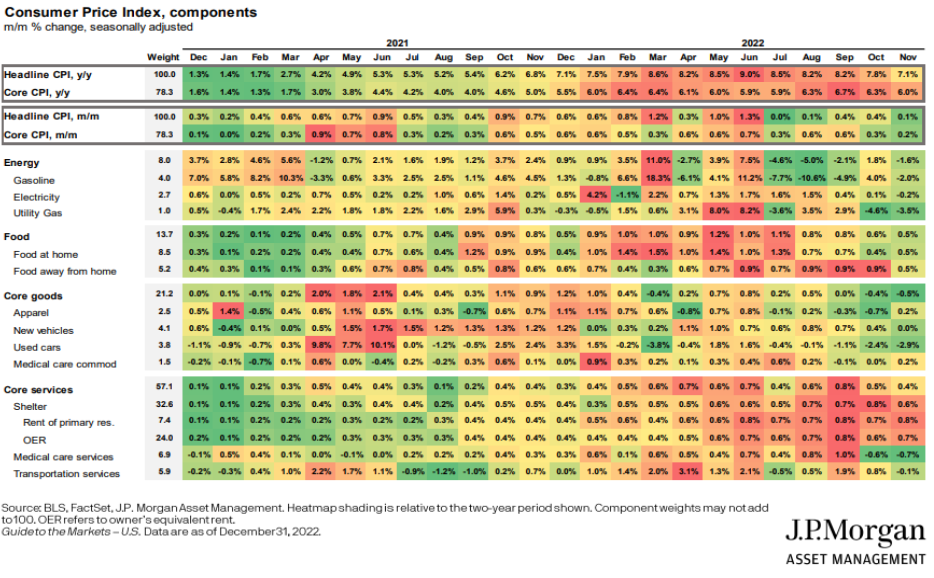 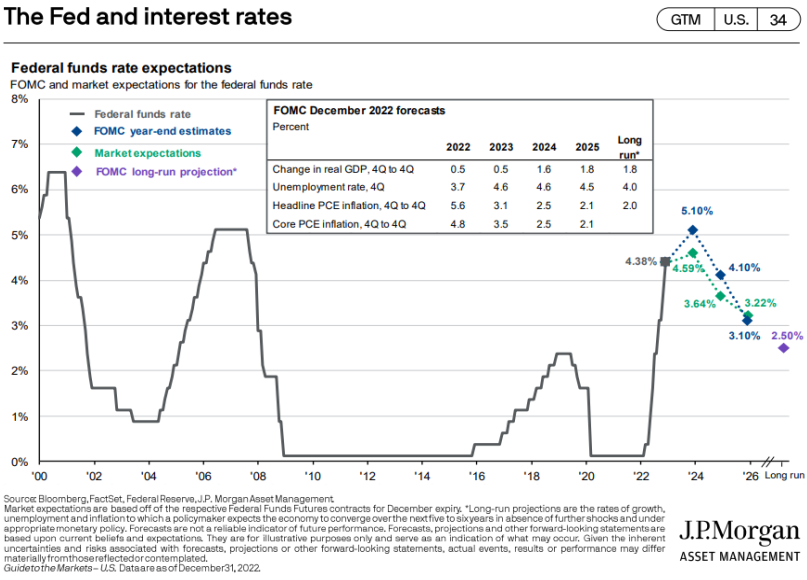 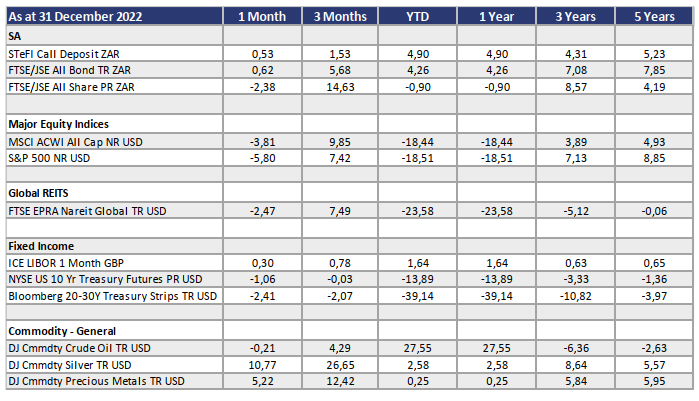